Delegates of the JETAA International Conference held in Tokyo (October, 2011) made a courtesy call to Senior Vice Minister Yamane of the Ministry of Foreign Affairs. The purpose of the visit was to thank MOFA for continuing to support JETAA and the JET Program while also informing them of the relief efforts JET alums are partaking in to support Japan. The JETAA USA Earthquake Fund was among the topics of discussion.

To see the Japanese, go directly to the MOFA website posting, or scroll to the bottom. Otherwise, see the translation below, courtesy of Jared Hayes, RMJETAA Treasurer.

October 24th, 2011
On October 21st, Senior Vice Minister Yamane met with the JETAA international (JETAAi) members as part of their International Conference.  The summary of this 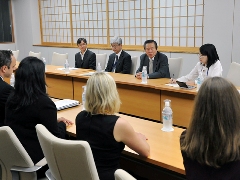 meeting is as follows: 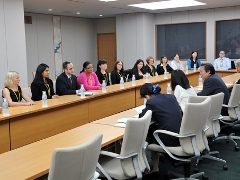