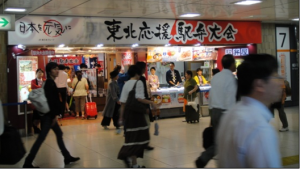 Delicious obentos from the Tohoku region sold in Tokyo

Japan is one of the most popular tourist spots in the world. The cities are filled with rich culture and history. Politeness is embedded in their culture which makes the overall population friendly and providing excellent customer service in all areas. However, the big earthquake in March 2011 brought a great downfall in Japan’s tourism industry. Everyone is concern with the radiation in Fukushima and the possible aftershocks that will lead to another big earthquake in Japan. These factors are great consideration to many people but what is the real situation in Japan? Are the Japanese people leaving their own country? How are the foreigners living in Japan dealing with the situation?

Due to the huge decrease in tourism after the Tohoku earthquake, many travel agencies, hotels, and airlines can also see a big drop in their sales numbers. In order to save the tourism industry, the government sponsored 20 candidates to visit Tohoku and let the world know the real situation in Japan. These candidates are previous English teachers in the Japan Exchange Teaching Program (JET) who used to live in the Tohoku region and are familiar with the area. I was lucky to be chosen to participate in this program and it was a great experience to re-visit the schools and towns I’ve used to work at. The people and town are still beautiful inside and outside. 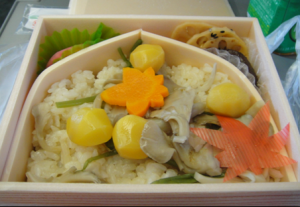 Chestnut and mushroom obento from the train station

After my arrival into Tokyo, I took the shinkansen to Sendai station. Everything looks the same as before four years ago. During the earthquake in March, I have seen a video clip of the inside of a bookstore by the station. The ceiling was collapsing and people were scared. I visited that bookstore this time and everything was normal. The people were doing business as usual and nothing has changed.

I stayed with my previous co-worker, Ms. Toshiko Sato and her family in Sendai. They told me the stories of their experience on the day of the big earthquake. “There was no electricity and no water for days. The supermarket was being raided by the people in the community and everyone was praying for survival. We are lucky to be far enough from the radiation or else we might need to evacuate as well. After we got water and electricity, life slowly went back to normal. We cleaned up the mess from the earthquake and gradually live life as usual,” said Toshiko’s mother. To be honest, everything does seem normal. Japan is probably the only country to have such a fast recovery in a big disaster such as this one. 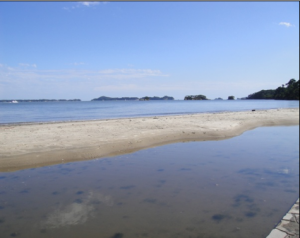 For the next few days of my trip, I visited Matsushima, Shiogama, Shizugawa, and Toyosato, the town where I used to live. Everyone in each town is trying their best to clean up any debris from the earthquake and working hard to recover from the earthquake. The strong bond among the Japanese people and the kind-hearted volunteers who donate their money, time, and effort to help rebuild this country really touched my heart. 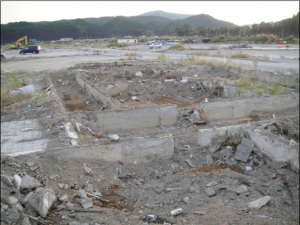 The remains of homes

Kessenuma is the town up north in Miyagi where the tsunami did the most damage. The JR Kessenuma train line no longer runs because the stations were damaged by the earthquake. A teacher drove me to Shizugawa to see the reality of the damage from the earthquake and I almost cried to see the nothing but garbage and piles of bricks and random cement blocks. There were visible remains of buildings still standing depressingly among the debris. As we were driving back to town, there were many cars on the road. These cars of people just finished their volunteer work. Many campsites are set up distributing food, talking to the people at the evacuation sites, and helping with the clean up around the community. These volunteers consist of foreigners who are currently living in Japan and Japanese people from all over the country. Everyone is putting every little effort they can to help out and we even saw a local stand selling onigiris (rice balls wrapped in seaweed). The teacher with me looked at the woman selling the onigiris and said, ”Everyone is trying their best. Most important is never to lose hope.” 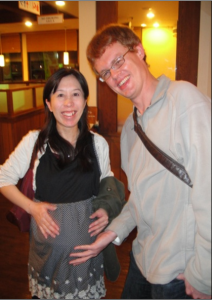 The earthquake did not stop the JETs from working in Tohoku. I’ve met up with some of the JETs who have been working and living in Tome City where I was based a few years ago. Michael from South Africa and his pregnant wife, Miyuki were not affected by the disaster. They documented their experience through pictures and videos taken after and during the earthquake. This happy couple is still living in Tome City with no plans of moving away from this beautiful place. New JETs have a positive mindset in coming to Japan to teach ESL. It was great meeting the old and new JETs and hearing how everyone is adapting well after the earthquake. 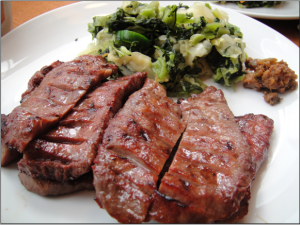 Another highlight of this trip is to enjoy all the foods that are only available in Japan. The fresh sushi, seasoned gyu-tan, and Miyagi’s delicious rice are what I missed most about Japan. I am sure they are available in New York or in other big cities, but the flavor and ingredients are not the same. Japanese culinary focuses a lot on the ingredients used and with simple methods and seasoning, the dish is served with an attractive presentation. How irresistible! 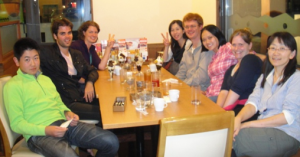 Gathering with old and new JETs

Japan is a wonderful country. The huge earthquake and tsunami in March was a huge shock to the people. But this does not stop the foreign teachers to continue to teach at their schools. Instead, this brought volunteers from all over the nation and all over the world to help rebuild this beautiful country. It’s been over six months and Japan has shown great progress in recovering from this disaster. We hope the world can continue to show their support and come visit this beautiful place.