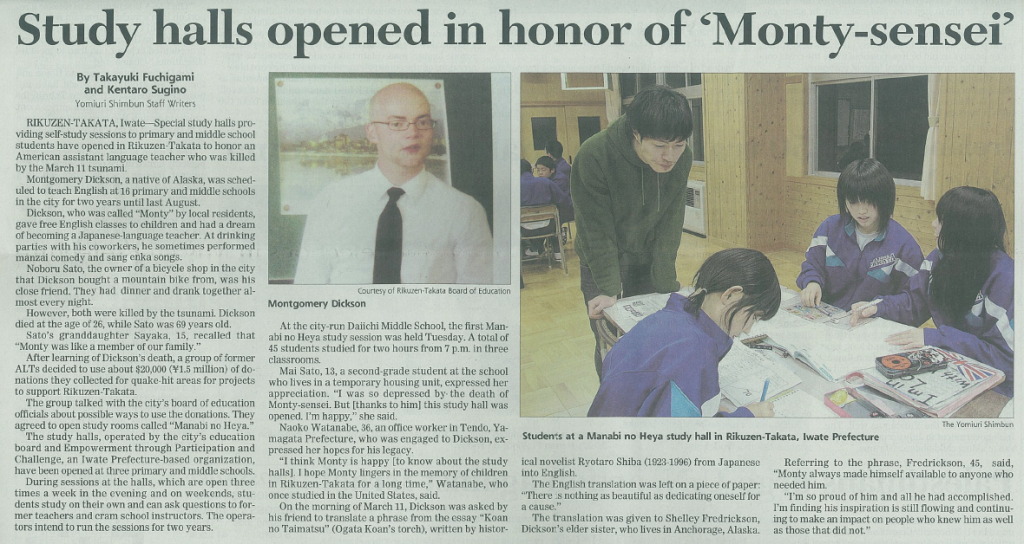 US JET Alums Jim Gannon and Jessyca Wilcox (Country Rep) took a break from volunteer work in Rikuzentakata to speak with a Yomiuri Shimbun reporter. Jim and Jessyca were part of the JETAA International Conference delegation which also traveled up to Tohoku to team up with current JETs to do some volunteer clean up in Tohoku.

Jim and Jessyca provided some context of JETAA USA’s efforts and goals in supporting Japan as former ALTs and spoke of the JETAA USA Earthquake Relief Fund. Part of the funds raised were gifted to the town of Rikuzentakata to be used for educational initiatives to support the students there. By teaming up with Empowerment through Participation and Challenge, an Iwate Prefecture-based organization, study halls have been opened at three primary and middle schools.

Click here for the English version of the Yomiuri Shimbun article, or read the feature below.

RIKUZEN-TAKATA, Iwate–Special study halls providing self-study sessions to primary and middle school students have opened in Rikuzen-Takata to honor an American assistant language teacher who was killed by the March 11 tsunami.

Montgomery Dickson, a native of Alaska, was scheduled to teach English at 16 primary and middle schools in the city for two years until last August. Dickson, who was called “Monty” by local residents, gave free English classes to children and had a dream of becoming a Japanese-language teacher. At drinking parties with his coworkers, he sometimes performed manzai comedy and sang enka songs.

Noboru Sato, the owner of a bicycle shop in the city that Dickson bought a mountain bike from, was his close friend. They had dinner and drank together almost every night. However, both were killed by the tsunami. Dickson died at the age of 26, while Sato was 69 years old. Sato’s granddaughter Sayaka, 15, recalled that “Monty was like a member of our family.”

After learning of Dickson’s death, a group of former ALTs decided to use about 20,000 dollars (1.5 million yen) of donations they collected for quake-hit areas for projects to support Rikuzen-Takata. The group talked with the city’s board of education officials about possible ways to use the donations. They agreed to open study rooms called “Manabi no Heya.”

The study halls, operated by the city’s education board and Empowerment through Participation and Challenge, an Iwate Prefecture-based organization, have been opened at three primary and middle schools. During sessions at the halls, which are open three times a week in the evening and on weekends, students study on their own and can ask questions to former teachers and cram school instructors. The operators intend to run the sessions for two years.

At the city-run Daiichi Middle School, the first Manabi no Heya study session was held Tuesday. A total of 45 students studied for two hours from 7 p.m. in three classrooms. Mai Sato, 13, a second-grade student at the school who lives in a temporary housing unit, expressed her appreciation. “I was so depressed by the death of Monty-sensei. But [thanks to him] this study hall was opened. I’m happy,” she said.

Naoko Watanabe, 36, an office worker in Tendo, Yamagata Prefecture, who was engaged to Dickson, expressed her hopes for his legacy. “I think Monty is happy [to know about the study halls]. I hope Monty lingers in the memory of children in Rikuzen-Takata for a long time,” Watanabe, who once studied in the United States, said.

On the morning of March 11, Dickson was asked by his friend to translate a phrase from the essay “Koan no Taimatsu” (Ogata Koan’s torch), written by historical novelist Ryotaro Shiba (1923-1996) from Japanese into English. The English translation was left on a piece of paper: “There is nothing as beautiful as dedicating oneself for a cause.” The translation was given to Shelley Fredrickson, Dickson’s elder sister, who lives in Anchorage, Alaska.

Referring to the phrase, Fredrickson, 45, said, “Monty always made himself available to anyone who needed him. “I’m so proud of him and all he had accomplished. I’m finding his inspiration is still flowing and continuing to make an impact on people who knew him as well as those that did not.” 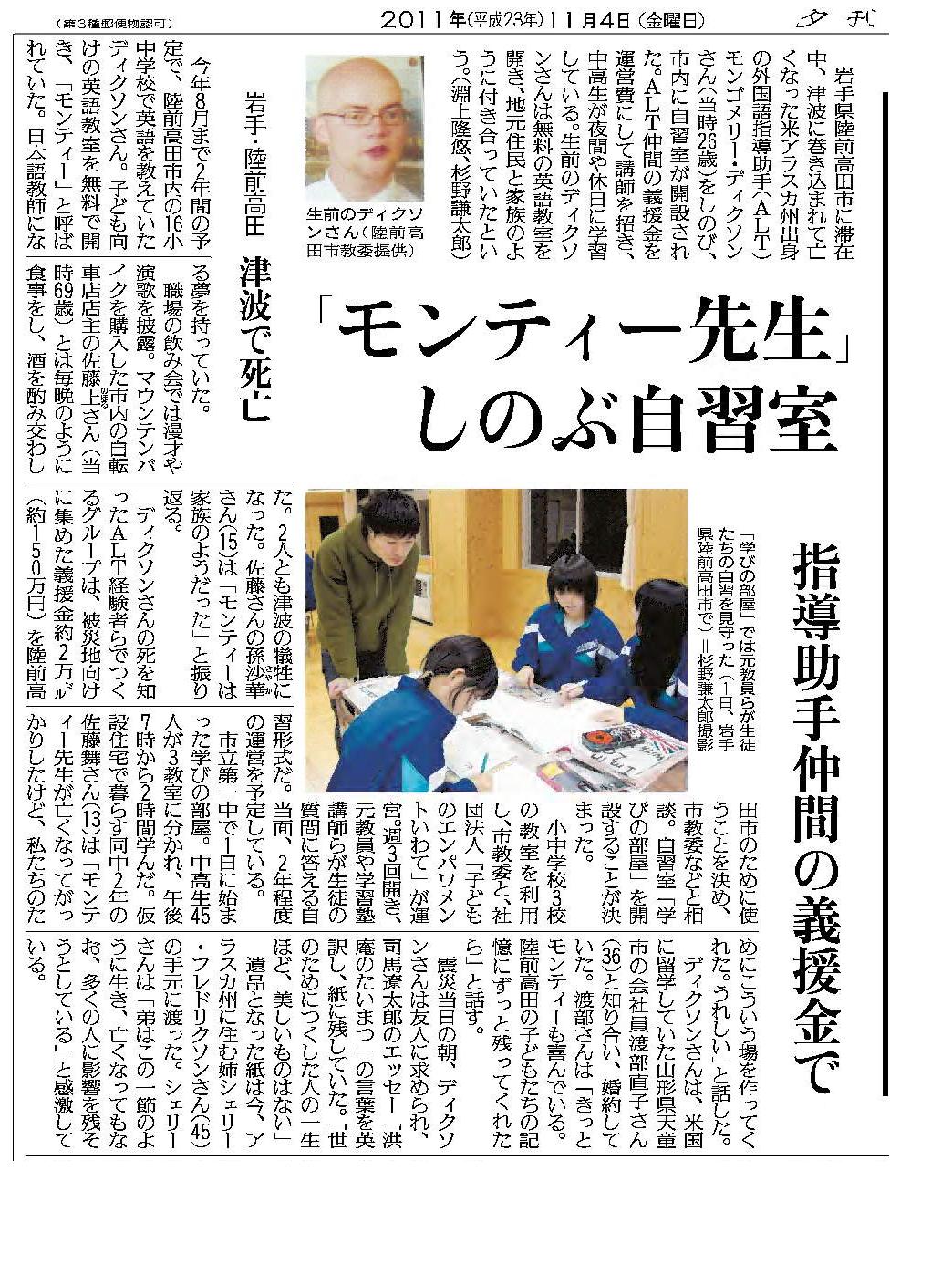