Harimaya Bridge out on DVD & Blu-ray!

JET Alum Aaron Woolfolk’s acclaimed film The Harimaya Bridge is now available on DVD and Blu-ray in a special “combo pack” for one low price. In addition to the film, the discs include cast and crew interviews, a behind-the-scenes documentary and Aaron’s commentary track where he talks about making the film in detail.

If you didn’t get the chance to see it in the theater, you can get it now on Amazon.com.

The Harimaya Bridge was inspired by Aaron’s experiences as a JET in Kochi Prefecture, and his enduring relationship with Japan since then. In fact, one of the central characters in the film is a JET, and many aspects of JET life are featured.

The film stars Ben Guillory, Saki Takaoka, Misa Shimizu, and Danny Glover (who also executive produced it). It is a drama about an American man who must go to rural Japan after the sudden death of his estranged son there, and the secrets he discovers his son left behind. The film had a nationwide release in theaters in Japan and a limited release in the U.S. The San Francisco Examiner called The Harimaya Bridge “one of the best films of the year”, while The Los Angeles Times called it “powerful” and “a unique, complex, consciousness-raising accomplishment”. During the film’s Japan release, many serving JETs and alumni affectionately dubbed the film “The JET Movie.” 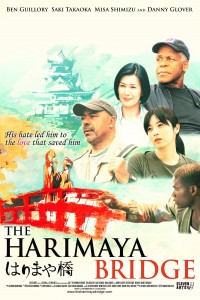 You can see a new minute-long trailer for the DVD/Blue-ray release HERE.

As always, people can learn more about The Harimaya Bridge at its official website and at its Facebook page.

This entry was posted in Featured Posts, Resources. Bookmark the permalink.