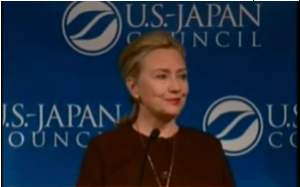 Secretary of State Hillary Clinton lauded the JET Programme for its vital grassroots relationship building at the U.S.-Japan Council Annual Conference on October 7th, 2011. Clinton mentioned the JET alumni community’s role in raising money for earthquake/tsunami relief and cited Monty Dickson and Taylor Anderson as important models of successful cross-cultural exchange that between our countries and cultures. She made special mention of our fellow alumni Taylor Anderson and Month Dickson who lost their lives in the March Earthquake and Tsunami.

Here is a link to Secretary of State Clinton’s speech on the State Department’s website along with a video. Below are a few excerpts:

“More than 35,000 people have participated in exchange programs sponsored by our two governments, programs like the Fulbright and the Japan Exchange and Teaching Program, known as JET.”

“[A]lthough these ties have already benefited both of our nations, they are not self-sustaining. We have to continue to invest in them.”

“The American people are proud to count Japan among our closest friends. I recently heard the story of an Alaskan named Monty Dickson who taught English at Yonesaki Elementary School as part of the JET program. While in Japan, Monty came to love Japanese poetry, and on the morning of March 11th, he had translated a poem by Shiba Ryotaro into English, and it read: “There’s nothing as beautiful as dedicating one’s life for a cause.” And just a few hours after writing those words, Monty Dickson was swept away in the tsunami. In fact, both of the Americans who died that day, Monty and Taylor Anderson, were teachers in the JET program. Their lives and their cause are part of the fabric of the friendship that we now share. The Dicksons, the Andersons, and the entire extended family of JET alumni have been working to help the communities that both Monty and Taylor lived in and grew to love.”

“The U.S.-Japan alliance is the cornerstone of a system in the Asia Pacific that has underwritten peace, stability, and prosperity for decades. And the close connections built by the Monty Dicksons and the Taylor Andersons and the U.S.-Japan Councils, those are the foundations that not only keep the cornerstones strong but keep building higher and higher.”

This entry was posted in Featured Posts, PR, Relief Fund. Bookmark the permalink.