Following Ambassador Kennedy’s donation last November of 110 books to the Taylor Anderson Reading Corner at Mangokuura Elementary School in Ishinomaki, the volunteer group that reads to the students there, Soyokaze no Ohanashi (The Gentle Breeze Talks), joined together with the Miyagi International Association (MIA) and current JETs in the prefecture to translate nine of these books into Japanese. The books chosen cover various topics such as the lives of children in the US and other countries around the world, science, and wildlife, and are simple enough to be accessible to younger students.

Ms. Kyoko Sasaki, from Soyokaze, reportedly first reached out to Mr. Andre Perez to ask for his support for the project. Andre, who is currently a Coordinator for International Relations with Miyagi Prefecture and MIA, took on the planning of the event, coordinating details between MIA and Ms. Sasaki. Once these were settled, he reached out to Miyagi JETs through his position as a Prefecture Advisor and tapped into the Miyagi AJET (MAJET) network through Ms. Tanya Zolotareva, another CIR and a MAJET officer. The various groups collaborated, with each taking responsibility for different steps of the process of selecting books, translating them, and affixing the translations. The whole undertaking reportedly went quite smoothly, thanks to MIA’s previous experience with translating books, the eight JETs and roughly 10 other people who volunteered their time and talent, and Mr. Perez’s connections to both MAJET and MIA.

The project was also profiled on Miyagi Prefecture’s Facebook page (https://www.facebook.com/visitmiyagi) and in the Asahi Shimbun and Kahoku Shimbun.

The books will now be available to students at Mangokuura E.S. to look at any time and they will be able to work on their understanding of the English texts by referring to the new Japanese translations. Having prepared translations at hand will also make it easier for the volunteers who read to the children.

As Ms. Sasaki, who is also a friend of the Andersons, having known Taylor, said in talking with one of the local newspapers that reported on the story, “This is a way to express our thanks to Taylor’s family. We want to show them that we are continuing Taylor’s legacy by carrying on her work.” 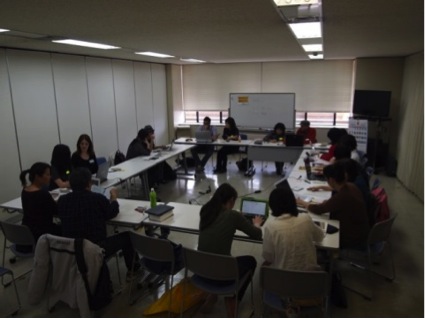 All the volunteer teams working to translate books for the Taylor Anderson Reading Corner.

One Response to JETs Carry on Taylor’s Legacy in Miyagi