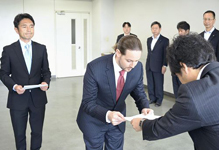 Former AJET Chair Matthew Cook (Osaka-fu, 2007-12) has been announced as “Shusa” (“Senior Staff”) at the Osaka Prefectural Board of Education.  His role will be working with all levels of English Educational Affairs and working as a member of the new English Education Reform Team.

Matt may be the first ever non-Japanese person to hold a senior level full-time position at the policy-making level at a Board of Education in Japan.  There have been other former JETs and other non-Japanese who worked as advisors and in other roles for the Osaka Prefectural Board of Education. Among other things, it is also encouraging to see a JET alum with an opportunity to play a substantive role in English education reform in Japan. Please comment here if you know of other examples to share with Steve at JETwit.

Matt has spent the past ten months working for the Osaka Prefectural Board of Education as a the Program Coordinator for their Native English Teacher (NET) Program (somewhat akin to being a JET Program Coordinator at CLAIR) following his completion of five years as a JET ALT in Osaka-fu and serving one year as AJET’s national council Chair.

Here’s a link to the article about the announcement in the Yomiuri Shimbun (Japanese only).

Here’s a 2003 article from The Guardian that quotes one in particular who seemed to have some good insights into reform and Japanese language education, Huw Olphant.

This article was originally posted here on JETwit.