Students in Rikuzentakata Take the Eiken in Memory of Monty

Thanks to Steven Horowitz of JETwit.com for sharing the English translation/ summary (see below) of this article. For the Japanese version, which originally was published on January 19, 2012 on the Kahoku Shimpo (Tohoku News) website, click HERE.

JETAA USA donated a portion of the Earthquake Relief Funds to the project talked about in this article. The project was a huge success resulting in triple the number of junior high students in Rikuzentakata taking the eiken. Thanks to all the US JETAA chapters who have helped raise funds to make support of these educational causes possible! 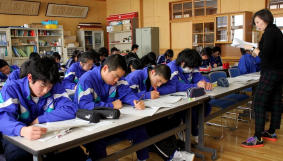 Roughly 80% of all middle school students, about 500 altogether, in Rikuzentakata City, Iwate Prefecture, will take the English Language Proficiency Exam (Eiken), in part thanks to support from JETAA USA, whose donation will help to cover the cost of the test. This is one way to bring to life the wish of Montgomery Dickson, who taught English here as an ALT, and who told his students, “I want you to love English.”

Monty worked for the Rikuzentakata Board of Education since 2009 and was an assistant English language teacher at the city’s elementary and middle schools. Immediately after the earthquake on March 11 last year, he evacuated to a park near the board of education offices, but was lost to the tsunami shortly after.

Everyone knew him as “Monty-sensei”, and admired the way he diligently studied Chinese characters (kanji) and performed Japanese folk songs (enka) and comedy skits (manzai) at the board’s social functions.   He dedicated himself to improving his students’ English ability, even holding classes for free over the winter break.  He was very popular with his colleagues and students.

Despite the fact that the learning environment is still in disarray for middle school students in the city, the number of students registered for the exam on the 20th is about three times higher than this time last year. There have been three prep sessions this month, with many students working through problems from past tests and studying to get ready.

Dickson came to Japan on the JET Program, and after the disaster JET alumni from across the US* collected money and created a fund to support recovery efforts in Tohoku, focusing their attention on Rikuzentakata and on Ishinomaki, in Miyagi, where the other American victim, Taylor Anderson, worked. This aid to the students is one expression of their warm wishes.

Rikuzentakata would also like to establish an exchange with Dickson’s home state of Alaska. Their hope is that in return for receiving so much support from around the world, they will become more outward looking themselves, and that their children become able to go to Alaska and speak in English about their memories of Monty and their own experiences in the disaster.