The Consulate General of Japan and Consul-General Ono recently hosted the 2012 National Day Reception. Rocky Mountain JET Alumni Association Executive Officers and Board Members were among the invitees along with other Japanese Community members, business leaders and government officials (including Denver Mayor Hancock).

Every year, the State of Colorado issues a Proclamation to the Consulate General of Japan in Denver on the occasion of the National Day Reception. This year, marked as “The year of opportunity for enhanced relations, friendship and mutual understanding between Japan and the State of Colorado”, acknowledged the success of the JET Program and the many participants sent from Colorado as a key component which continues to strengthen ties between Colorado and Japan.

The number of JETs sent from the Rocky Mountain region remains strong as does the quality of JETs we send as participants. Additionally, many of our JET alums in this region remain involved in supporting and strengthening US-Japan relations in a variety of fields locally, nationally and internationally. This recognition from the State of Colorado is indeed significant to RMJETAA and to the JET Program as a whole. 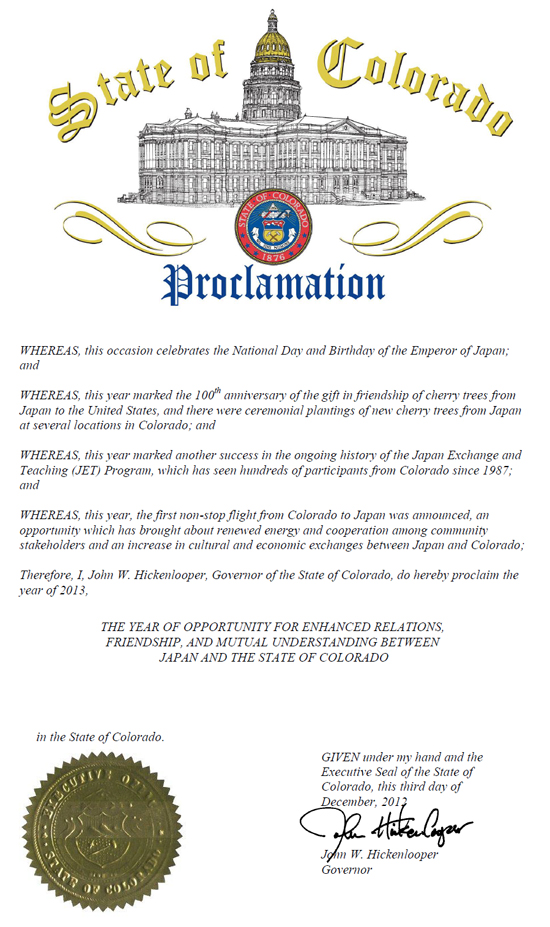 This entry was posted in Chapters, Featured Posts, PR and tagged Local events. Bookmark the permalink.